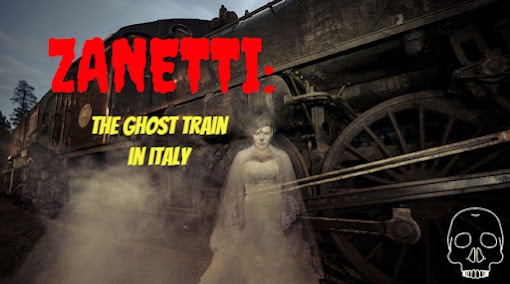 Have you ever imagine seeing a ghost? What more if it is a whole train? Would you ever believe it?

The stories of the presence of ghost spirits inside the houses and their wicked influence on humans are often heard everywhere and the occurrence of such incidents creates a strange fear in everyone's mind. Usually, there have been many such mysterious train incidents took place in the past that completely frighten us. But what if the whole train turns into a ghost train. Yes, you heard it right, there is a train that is alive despite being disappeared and people are frightened of it as we are afraid of a ghost. There have been many incidents of seeing this train, but no one knows where this train came from and where it disappeared. Many people consider this train as haunted, and others say that it is a time travel machine that is moving back and forth in time. Somewhere it is also believed that this train is from the parallel universe or some other dimension that is stuck in the time loop.

On 14 June 1911, there was an Italian train of a company named Zanetti departed from Rome, in which there were about 106 passengers who boarded the train for sightseeing. Although the destination of this train was a nearby hill station, but before the train was started, no one knew that they were going to embark on a journey that had no destination nor end. To reach its destination, this train had to pass through a tunnel about one km long, but the most surprising thing was that this train went through one end of that tunnel but never come out from the other end. At first, people thought that the train might have been trapped somewhere inside the tunnel or could not reach the other end due to any defect in the train. After receiving the news of the train's disappearance, some officers of Rome police and the railway authority went for the purpose of locating the train from this tunnel. As those people went inside the tunnel, their curiosity and fear grew consistently, and gradually they reached the end of this tunnel, but no trace of the train was found. Everyone was stunned by this incident, where and how such a huge train disappeared inside this tunnel.

The mystery of the disappearance of this train had not even started solving, when two people came to the Roman railway and said that they are both passengers of the same train out of 106 people. Both seemed to be mentally disturbed and in a very bad condition. But after some mental health treatment, they finally returned to normal. They said that they had jumped from the train a few moments before the train entered the tunnel because they felt something untoward happened there as they noticed that the thick white smoke started filling the train. The statement of these two passengers made the mystery of this train even more profound and interesting. However, the Roman railway took care to close this tunnel permanently on both sides.

Nobody would have recollected that accident if the relative of one of the passengers of the train found an interesting record in the archives of 1926, which left everyone shocked. According to this record, 104 people were admitted to a hospital in Mexico in 1845 and all of them had become mentally deranged. No one knew who these 104 people were and where they came from, but the shocking thing was that all these 104 people were Italian, and they all said that they came from Rome. The statements of these 104 people and the incident of the 1911 Zanetti train coincided with each other somewhere. But the surprising thing was that if the incident happened in 1911, then how can the victims of that incident get admitted to a hospital in 1845. An even more mysterious fact is that they all said that they had arrived from Rome to Mexico on a train. But the distance from Rome to Mexico is 10,234 km and there is a huge ocean between these two places. Then how can a train travel such a long way through the water?

While examining the statements of these 104 Italian people, when a list of water vessels and their passengers from Rome to Mexico was checked, none of these 104 people was mentioned in that list. So, from where did the residents of the same country who speak the same language simultaneously come to that hospital? From one of these Italian people, the hospital staff also got a tobacco box with 1907 written on it above the company's name, which is kept in Mexico.

So where did this mysterious train disappear from that tunnel, this thing remains a mystery even today. But this ghost train has been seen in many parts of Russia, India, Germany, Italy, and Romania to date. All the eyewitnesses say that the train they saw suddenly appeared in front of them and there were three compartments in the train with windows shut with curtains. It is clear from this point that this suddenly appeared train seen at these different places was the same. When this ghost train was seen in Poltava in 1991, a paranormal investigator jumped into that train in front of several witnesses and disappeared forever. The search for that investigator continued for a long time but now he is officially declared missing. Was it a ghostly event or is that train really stuck in a time loop and moving back and forth in time? No one really knows.

Popular posts from this blog

December 20, 2021
Fruit Salad is a general term referring to a fruit dessert. This dessert is typically composed of different fruits combined with cream and sweetened milk. This can either be served as an appetizer, a side dish, and as a dessert. In the Philippines, fruit salad is considered to be more of a dessert rather than an appetizer or side dish. The Filipino version of the fruit salad requires the use of condensed milk and table cream which makes the dish rich and sweet. We Filipinos have different taste in salad. most of us make salad using the cocktail fruit that we usually buy in the market but in  this recipe we put a little bit of  strawberry, blueberries and kiwi to add the yumminess and tasteness of th salad. How to make fruit salad: Ingredients 1 can large fruit cocktail 1 cup fresh strawberries cleaned and cut in half lengthwise 1 cup blueberries cleaned 3 pieces kiwi cleaned and sliced into bite size pieces 3/4 cups nata de coco 14 ounces condensed milk 8 ounces tabl
Post a Comment
Read more

What is Your WHY?

February 10, 2022
When you wake up every morning, what drives you? If you want to live a life of success, a life of complete success, happiness and fulfillment, you must find your purpose. You see, if you don't know what your purpose is, if you don't know what drives you, what inspires you, then you have no reason to improve your life. How can you improve your life? If you have no reason? To improve? Why do you do what you do? Why do you do what you do? What's the reason? Why do you exist? Do you know what it takes to be great? Are you willing to go the extra mile? I tell you time and time again. You will get tired but if you have a walk will give you that extra strength. That extra foot you need that extra hour you need. The courage. Why are you different from everyone else who's trying to do the same thing you're doing? What makes you stand up? Why are you sewing boy? Find your why. Your why will pull you up when you feel like you don't have the strength to get up anymore. Yo
Post a Comment
Read more